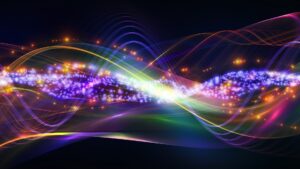 For the last few years I’ve been working to help people to move forward positively with their lives by energetically removing blocks that stop them from advancing. Recently, I’ve felt the urge to really dig in and find out, in greater detail, the impact that our beliefs have on our lives. It’s truly been a fascinating journey and I wanted to share this information with you in the hope you will better understand why you are stuck, or why life just isn’t going the way you want it to, along with how easy it is to correct it and move on.

According to Dr Bruce Lipton, we are made out of 50 trillion cells, and every cell has negative voltage on the inside and positive voltage on the outside, which means we, as individuals, are massive walking batteries. Each cell has 1.4v of electricity, which calculates to our bodies holding 70 trillion volts of electricity. Fascinating. Now you can really say you are a bright spark and have an electric personality.

Have you ever heard of the phrase ‘you must have caught my vibes?’  You might have been thinking about a friend in the morning, maybe fondly recalling your last meeting, and thought you must call and see how things are.  Now later on that day, the phone rings or you receive an email from that person. Coincidence, right?  Nope – you were communicating energetically using vibrational waves that your friend picked up.

Human beings, animals and plants too, all communicate in the same way; through harmonic resonance, or vibrations. Take the antelope for example, he doesn’t go bounding up to the lion roaming in the boondocks and say “Hi neighbor! How’s it going??” He doesn’t need to. He can tell from a mile away that the lion is emanating bad juju and he shouldn’t go anywhere near under any circumstances because he will end up being lunch. It’s a ‘knowing.’

Here’s another example. If there’s someone walking down the street that has the intention of snatching a purse, he’s going to automatically be drawn to the person that holds fear of her purse being snatched. Someone else with the belief that she is safe at all times, will not even be considered, and in fact will repel the negative intention and the thief won’t even go near.

Your instinct, if a situation is not in your best interests, can give you a horrible gut-wrenching feeling in your stomach, or sometimes it feels like your stomach drops to the floor.  I think we’ve all experienced this at some point in our lives, but still made the decision to go with what our head told us rather than follow our true and natural intuition.  All knowledge about our natural instincts has been kept from us.  We have not been taught how to interpret our vibrations, rather we have been taught to listen to what others tell us instead of following our internal instincts in what ‘feels’ right.  Language has replaced our feelings, our gut instinct, our right to do what resonates with us as the right path to take. We have been deceived throughout our entire lives – but not anymore.